This release focused mostly on plugins to extend the range of supported devices. Of course the usual amount of fixes across the entire platform is included too.

The generic ZigBee plugin now supports fire/smoke, temperature, water, humidity and light/illuminance sensors. That means, all such sensors of these type out there following the ZigBee Cluster specificiation will be supported now. In addition to that, we’ve also added vendor specific tweaks for those made by Develco. Develco produces high quality ZigBee devices but doesn’t directly sell them to end user, but instead they are white labelled and sold with different names, such as frient or Gewiss. While they do follow the ZigBee specification and would work with the generic plugin already, they often have additional features (or pack multiple functions on one device) which are also supported by the zigbee-develco plugin. Also, the Ikea shortcut button was added. 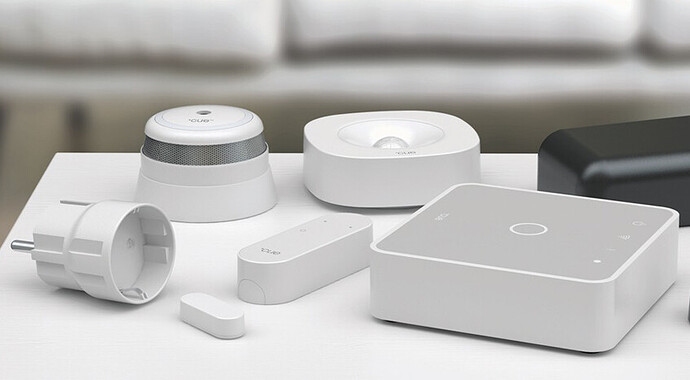 There is a new plugin named bimmer_connected. This allows adding Bimmers (BMW cars) to nymea by using an unofficial library to connect to the BMW connect API.

The Keba plugin now also properly supports the “German edition” of their wallbox.

The Somfy Tahoma plugin was reworked entirely to not use their cloud API any more but instead connect to the Tahoma gateway locally. This improves the overall feel of the plugin a lot and gets away with hitting polling rate limits on their API servers. Thanks to Somfy for introducing this new offline API on their gateways! (Note that this API is currently available as a developer preview and needs to explicitly enabled by the user.)

In good news for guerilla solar plant users, nymea now supports the first Micro Inverter, the Bosswerk MI-300/600. This device seems to run the same software as the Omnik, Ginlong and Hosola inverters and thus this plugin may also work with them. However, we didn’t have any chance to test that. If you own one of those devices we’d appreciate any feedback whether it’s working with them too or not.

Here’s a screenshot of the energy dashboard with a Shelly 3EM as root meter and the Bosswerk MI-300 installed on the balcony: 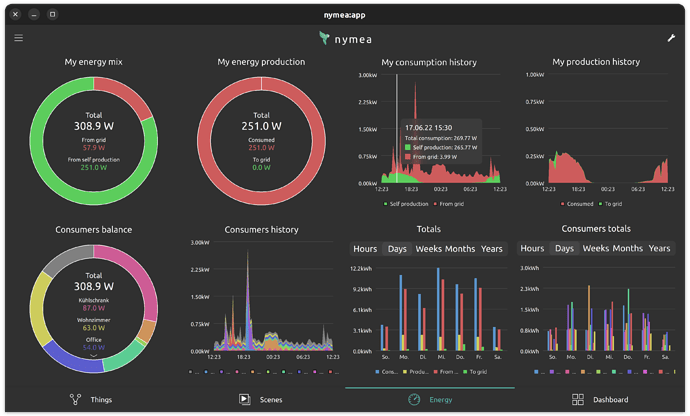 Another energy related addition is the new Stiebel-Eltron plugin for heat pumps.

In other news, mainly for developers, nymea-mqtt now supports WebSocket transports, on both, server and client ends, as well as the standalone nymea-mqtt-server and nymea-mqtt-client programs have been extended to feature completeness. In combination with nymea:app’s sigv4utils, this can now be used to connect to the AWS IoT core broker over WebSockets too (previously only certificated based MQTT-TCP connections were supported).

nymea:core received one noticeable feature: The debug interface was extended to not only allow enabling/disabling certain debug categories, but instead allow a fine grained control (debug/info/warning/critical) for each category.

according to Nymea 1.2.0 documentation Bosswerk MI600 Micro Inverter ist supported. I’m running Nymea Version 1.3.0, but can’t find it, when I try to add new things. It’s not showing up in the list of supported devices.

Hey. The plugin may not be installed by default. Go to system settings, software updates and then on add/remove software. Then search for Bosswerk and install it.

Hello Michael,
first of all: Wow, that was a fast response, thank you I found both Bosswerk plugins and installed it. Now it can be selected to search for new things. But my MI-600 ist not found, though it is in the same network. Is there any documentation available how to connect? Additionally it would bei probably more useful for the users, if they get a list of all possible things to connect, even if the plugin ist not installed.

Hmm. So far I could only test the plugin with my MI-300. While it should also work with the MI-600, there may be a bug in the discovery.

Can you please enable the Bosswerk debug output (system settings, developer options, debug interface. Then in the logs tab on the web interface).
Once enabled, try to add it again and then grab the debug output and send it to me. I’ll look into it.

For the plugin installation, yes, we’re aware that it’s not really great as it is right now to find additional plugins and will improve the situation eventually. probably via an initial setup wizard that will guide the user through the additional plugins repository somehow

Actually, please also enable the NetworkDiscovery debug logs. My guess is that the hostname resolution doesn’t work properly in your network…