I have done a thing

I really like the new(ish) dashboard feature, but it did not quite go far enough for me. I like Nymea but miss the Openhab display. so I have made my own using dashboards as a base.

Using the JSONRPC I have got the app to load dashboard folders as rooms. then within the rooms I have fragments that load depending on the things with in that folder.

I have the switches wired up to action events so they function, just need to get notifications wired up so the Things update in real time. 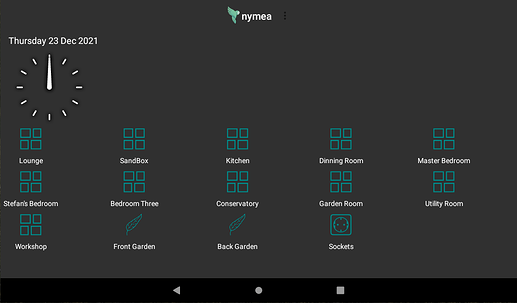 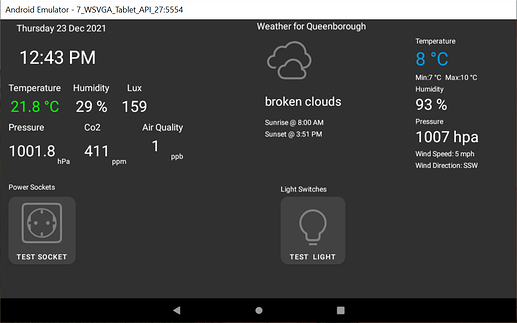 Would you mind sharing the code changes? Id like to check it out and maybe get some inspiration from it for future Features to the dashboard.

Now I think this is somewhat too specific to be included in the upstream app as is, however I could try to make adding such modifications easier. For instance I could allow loading qml files with such content without having to recompile the app. That way you could still upgrade the app while keeping your custom dashboard working (unless some bigger API changes would break it, but that should be quite rare).

Thanks I can share the code on my github. However it is a native Java app for android rather than an extension to the existing fronted. This could be achieved in the existing dashboard setup if you could change how the things are displayed. I don’t know qt. But would it be possible to have multiple views for a thing?

I have a couple of cheap amazon fire 7 tablets that I intend to wall mount when we move to our new house. These will be used to control our Tuya light switches and some of my custom smarter plugs and environment monitors

Just wondering, how are you dealing with the tablet screen auto-off and stuff? Does this app keep the display always on or does one need to press the power button to wake it up? I always found that very annoying when playing with wall mounted tablets (which is why I went for Raspberry Pis with touch screen instead - as nymea:app can take full control of the display without having to mod android with root access and whatnot).

But would it be possible to have multiple views for a thing?

can you elaborate on that please?

This is interesting. How is possible to get those things from nymea:core into a native android app?

As Michael has stated using the JSONRPC is quite straight forward. we have recently moved house and I managed to tear my Achilles tendon so have had a bit of time on my hands to rework this.

I have made some environmental monitors using ESP 32 and they are hooked up with CO2, Temperature, humidity and Light sensors and have a HTTP rest interface. I use some JavaScript magic to populate nymea with the data from these sensors.

I have used OpenHab and Domoticz in the past, these have room dashboards which is basically a group of sensors for an area. I like the simplicity of Nymea and wanted this sort of functionality in it. The app has a house class which loads the dashboard JSON as Rooms. it then loads the things in the rooms into a Thing class with a state listener when Nymea pushes out a state change the listener picks up the state change for that Thing and changes the value accordingly.

I order to keep the tablet awake I just grab a wake lock at app start, this seems to do the business. 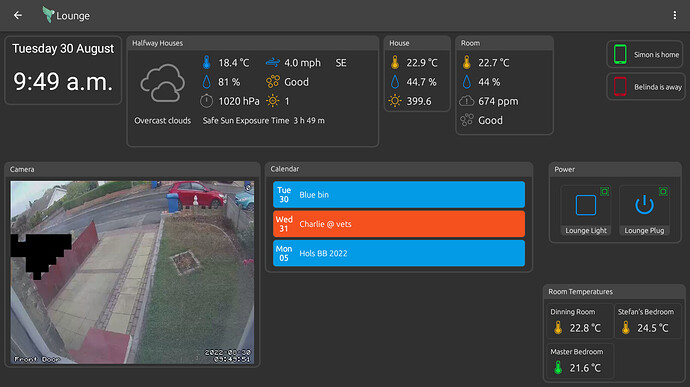