Hi guys,
I recently discovered Nymea, but I really like it. I installed it on a Raspberry 0 with a 4GB SD. The system works quite well, and it is not my intention overloading it, I know I can’t ask for too much. It would be very useful to be able to have some other information in the state of the system, such as the SD space still available. As I could report on Nymea the data generated by a UNIX line command as “DF”:

That could probably fit into the systemmonitor plugin. Thanks for the suggestion.

@mosix I’ve added such a feature to the systemmonitor plugin. You can test it from the experimental repository. Currently it only shows the percentage of the disk usage for the root volume but that should be enough for most cases (including yours afaict).

Ciao Michael, and thank you for remembering my request. She is good news. I will try to use this value in a rule to be warned when a certain threshold is exceeded… it can be done, right?

Yes, you can create rules that compare the disk usage and trigger actions.

I’ve just reworked the plugin a bit more and have split the functionality into 2 thing classes:

This may break your rule on the next update in experimental.

Hi @mzanetti thanks for the nice upgrade of system monitor!
I will also use that now in a warning Notification, since some system logs filled up my SD. 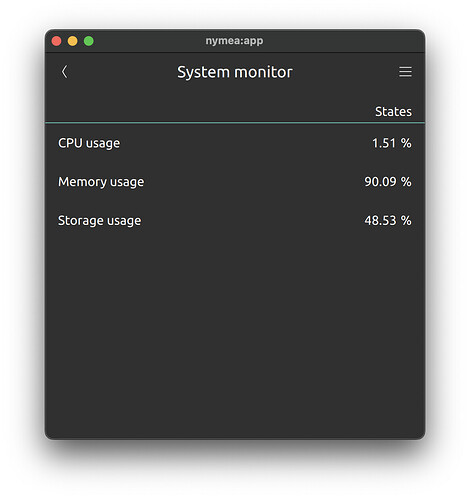 The numbers would fit better to that backup SMB mount - so I am a bit confused:

Additionally, I was also wondering that Memory usage says 90.09% even though htop says that it is just a bit over 30%.

Maybe you can help me to interpret the numbers correctly.

I’ve looked into this now. Turns out, the memory usage was indeed wrong. The used api didn’t exclude information about the cached memory (the yellow part in your htop screenshot). I’ve fixed this.

For the storage use, I believe it should be the correct volume, but the calculation is done slightly different. As you can see, the size of 15G doesn’t line up with Used (7) + Available (6.8), which is 13.8. The actual usable size is smaller than the total volume size, depending on various factors like FS type, block size etc. So, depending on which values are used for the calculation they may not line up. To be honest I’m still not sure how df exactly comes up with 51, but the closest I come is by using 100 * used / (used+available), which is 50.7%. This does line up in your particular example, but in my case it still doesn’t (44% vs 43,1%):

Anyhow, I did adjust the calculation in nymea to be as close as possible to df to reduce the confusion.